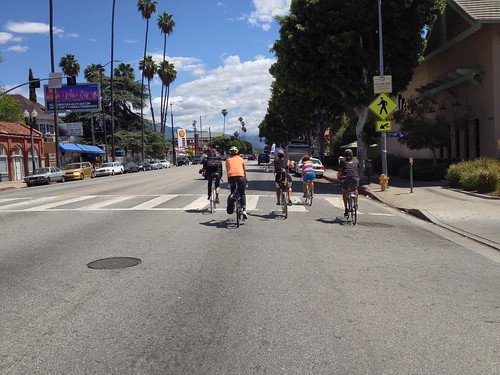 Cyclists ride past the crosswalk at Avenue 51 and N. Figueroa Street in April of 2014.

Councilman Gil Cedillo is working to divert $200,000 from the Los Angeles Housing and Community Investment Department to install a traffic signal at the dangerous intersection of Avenue 51 and North Figueroa Street. The cost to make this one intersection safer is about the same as installing a bike lane and road diet along the entire length of the street – a project already designed and funded with transportation dollars (not housing dollars!). The added motorist delay from a traffic signal is worse than installing a road diet along the entire length of Figueroa. This is what the word “stupid” is meant to describe: spending more to get less. This is politics over prudence, and I’d encourage you to reach out to the mayor’s office and the Los Angeles Housing and Community Investment Department about this plan – to demand that no traffic signal be installed until the road diet and bike lanes go in with it.

It appears that cost is never an issue with Gil Cedillo. Motorist delay isn’t a big deal to him either – this traffic signal will easily add more delay on North Figueroa Street than a road diet would. What appears to be an issue with councilman Cedillo is grooming his public persona and making sure that bike riders in his district know they don’t matter.

That is not an acceptable method of local governance. Cedillo needs to stop playing games with our lives and making enemies out of neighbors. This traffic signal is a big expense that wouldn’t be needed if a proper road diet were installed and principals of placemaking were being used instead of highway-style engineering.

One of former city councilman Mike Hernandez’s proudest achievements was bringing in a “Craftsman-style” Food 4 Less supermarket and a drive-thru McDonalds to the empty lot on North Figueroa Street in Highland Park between Avenue 50 and 51.

With the supermarket in place, however, another big problem popped up: people wanted to cross the street at Avenue 51 to get to the market. On auto-dominated North Figueroa, with cars rushing between red lights at Avenue 52 and Avenue 50, the increased pedestrian presence along with lots of cars making turns into and out of the Food 4 Less parking lot added up to a growing list of casualties at Avenue 51. Instead of calming traffic, or doing some placemaking, the City spent over $150,000 on a flashing crosswalk sign at Avenue 51.

The LADOT pioneered the use of this expensive piece of street furniture. The flashing overhead crosswalk lights, you see, killed many birds with one fell swoop: it shut down any debate about pedestrian access (“Hey, look, it is a flashing light!”) while doing nothing to slow down car drivers. The expense of the light set the bar for pedestrian safety rather high, but Avenue 51 handily leapt over that bar with a long list of injured people, damaged property, and even a few fatalities.

Avenue 51 has continued to rack up a list of casualties and car crashes. The rest of North Figueroa hasn’t done much better, taking a life every year (at least) and tallying loads more crashes and injuries. Figueroa For All and other community stakeholders and groups had our plans for a safer street stopped dead by Councilman Gil Cedillo when he scared the LADOT into stopping a road diet and bike lane project running the length of North Figueroa Street.

The LADOT’s plan included bike lanes and a road diet – infrastructure that would have cost about $250,000 to implement. Analysis by the LADOT showed that the road diet would have added about 41 seconds of peak hour delay at the intersection of York and Figueroa. $250,000 in dedicated transportation dollars and 41 seconds of delay and the street would have been measurably safer along its entire length, from Colorado Boulevard to the north down to Avenue 26 in the south. A similar road diet along York Boulevard resulted in a 25%+ drop in reported collisions according to an LADOT analysis.

Gil Cedillo, in response to criticism about killing the road diet plan for no discernible reason, has realized that street safety is good local politics. Now in his 2nd year in local office, he has changed tactics and has followed the pattern of several council offices before him: waiting for neighbors to die and installing piecemeal signs and signals after the fact to gain maximum exposure.

The problem with this approach is that it is expensive and it doesn’t solve larger problems along a street. It is a stupid way of managing local transportation planning issues. It is politics over prudence.

Please, reach out to the mayor’s office and the Los Angeles Housing and Community Investment Departmentto demand that the bike lane and road diet on North Figueroa be implemented in addition to, or instead of, this traffic signal.

You can get in touch with mayor Eric Garcetti’s office here:

You can get in touch with the LA Housing and Community Investment Department’s Planning and Procurement Unit here:

One thought on “Cynical Cedillo puts politics over people”