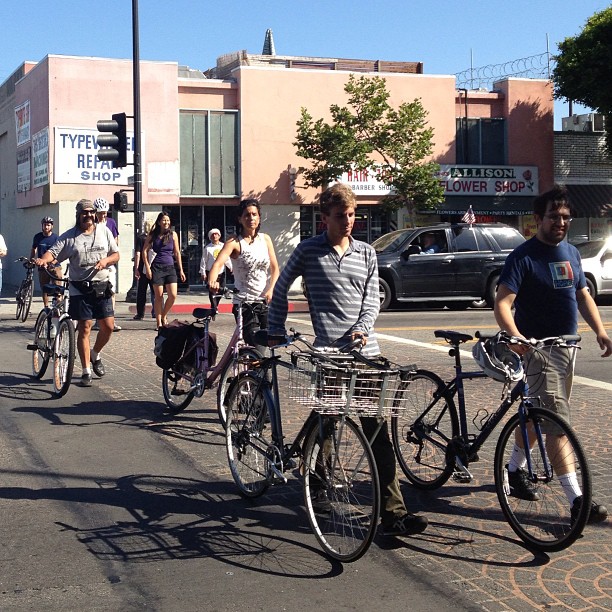 A couple of growlers from Eagle Rock Brewery and a little something from everyone to eat and we’ll have a lovely evening talking about the upcoming street safety meetings scheduled by Gil Cedillo (our local anti-bike councilman). You can read more about those scheduled street safety meetings in a post published just this morning on the Flying Pigeon LA shop blog.

Figueroa For All’s “Eat, Drink, and Talk about Cedillo’s Street Safety Meetings”
Wednesday, November 26, 2014 at 6 p.m. at Flying Pigeon LA bike shop (located at 3404 N. Figueroa St., Los Angeles, CA 90065). It’s a potluck and Flying Pigeon LA said they are going to fill a couple of growlers up at Eagle Rock Brewery before the meeting. Good times to be had.

“Close The Gap!”, they announce at the 710 freeway extension rallies. It is taken as gospel, by some, that connecting the 710 and the 210 freeways will create a magic nexus of “growth”, property value increases, and quality of life improvements – despite decades of evidence that urban freeways do exactly the opposite.

This 528 foot gap between LA’s bike lanes and South Pasadena’s keeps our communities cut off to cyclists.

Let’s talk about another gap: a gap between bike lanes in North East Los Angeles and South Pasadena. Three South Pasadena Public Works Commissioners (Steven Ray Garcia, Alexander Main, and Mathew M. Pendo) voted on November 13, 2013 to keep freshly installed bike lanes on Los Angeles’ York Boulevard from connecting to bike lanes on South Pasadena’s Pasadena Avenue … by a measly 528 feet! The cost to close this gap, at the time the vote was taken, was in the range of $4,000 – about what it costs for two hours of a lobbyist’s time on the 710 freeway closure. This decision also cost both Los Angeles and South Pasadena by continuing to stifle business foot traffic that would inevitably flow across a bridge connected with bike lanes – as shoppers, commuters, and day-trippers borne on bicycles would finally have a direct route between Highland Park and downtown South Pasadena.

But hold on! We’re not finished yet with the gaps. Councilman Michael A. Cacciotti of South Pasadena has been working for years to connect the Arroyo Seco Bike Path (a short bike trail located in the Arroyo Seco’s riverbed) to a dirt foot path following the Arroyo Seco River up into Pasadena. To make this recreational bike riders dream happen the councilman required land, money, and the City of Los Angeles’ permission. He’s got the land to connect to Pasadena – from the driving range that leased their property alongside the Arroyo in South Pasadena. He’s got the money – from Assemblymember Chris Holden of the 41st district (who has gotten $410,000 of the $1 million South Pasadena has amassed).

What Councilman Cacciotti is missing is, funny enough, permission from the City of Los Angeles to run his bike trail across 528 feet of paved land under the York Boulevard bridge.

I don’t care for the 710 gap closure – I think it’s bad business for the cities in the area that would have to deal with the pollution and decreased property values from yet another urban freeway.

The South Pasadena to Highland Park Bike Gaps, however, are something many of us would like to see connected!

Tomorrow night, Wednesday, November 5, 2014, at 1424 Mission Street, South Pasadena, CA at 7:30 p.m., we can make public comments to the full South Pasadena City Council about closing the Bike Gaps. It’s not much, but it’s a start.

If you’d like to submit an email on the topic, here is a special link that will CC: everyone that ought to know about closing the Bike Gaps!